This AUX Bluetooth adapter has an AUX interface and supports Apple devices up to version 4 and also has a Bluetooth module.

Benefit from the hands-free system and drive safely when making calls. You also have the possibility to use Bluetooth music streaming on your iPhone.

The AUX Bluetooth Adapter Adapter is compatible with the following Apple devices:

iPod Mini 1st/2nd generation
iPod Nano 1-6. Gen.
iPod 4th-6th Gen.
iPod Touch 1-4. Gen.
IPhone 2-4S
iPad 1-3. Gen.
Using the hands-free kit, which connects to the adapter via Bluetooth from your Apple device/mobile phone, making calls in the car is safe and easy.
You also have the option of using Bluetooth music streaming from your Apple device/mobile phone. And you can experience your music collection from your smartphone or iPod Touch with the full sound quality of your car hi-fi system.

Advantages
Without taking your mobile phone in your hand you can now make calls with Bluetooth enabled mobile phones or listen directly via 3.5mm jack plug from any smartphone.
Simple plug & play installation. It connects to the back of the CD changer input of your radio. It is very easy to operate using the radio buttons.
The playlists can also be selected via the Apple device (control on the display). When using another source on the radio (e.g. FM) the music stops.

Dimensions: 90x70x15mm
AUX input for 3.5mm jack plug (no control possible)
Supports above mentioned Apple devices
iPod/iPhone/iPad is charged as soon as the ignition is on
The following items are included in the scope of delivery 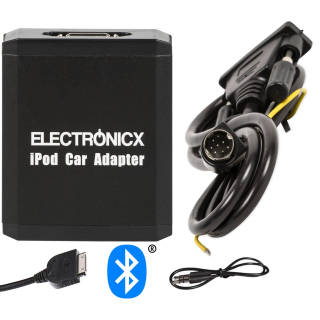 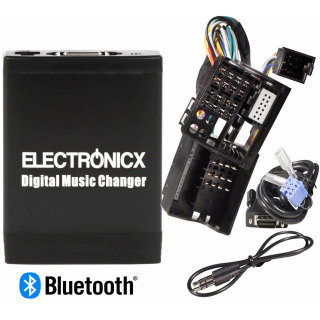 By selecting "Accept all", you give us permission to use the following services on our website: YouTube, Vimeo, Google Tag Manager, uptain, Google Tracking. You can change the settings at any time (fingerprint icon in the bottom left corner). For further details, please see Individual configuration and our Privacy notice.