The AUX Bluetooth Adapter is compatible with the following Apple devices:

Advantages:
By the direct connection at the back of the CD changer input of your radio, a very good sound quality is guaranteed.
An activation or programming in the workshop is not necessary here.

The operation is very easy via the radio buttons. With the disc buttons you can jump back and forth between the different folders, with the track buttons between the titles.
The playlists can also be selected via the Apple device (control on the display).
When switching off the radio or the ignition, the last position is stored. 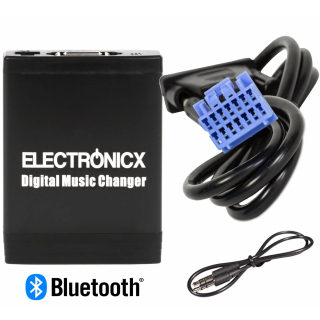 By selecting "Accept all", you give us permission to use the following services on our website: YouTube, Vimeo, uptain, Google Tracking, Google Tag Manager, Adcell Marketing. You can change the settings at any time (fingerprint icon in the bottom left corner). For further details, please see Individual configuration and our Privacy notice.